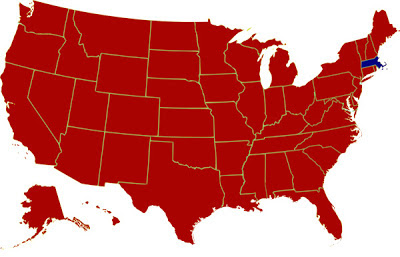 People like George McGovern, who passed away yesterday, fascinate me.

Above is the 1972 electoral college map-- the one where Richard Nixon captured 520 electoral votes to McGovern's 17.  It was one of the worst defeats of all time.  The South Dakota senator didn't even win his own state.  His only victories were in Massachusetts and the District of Columbia.

I was two months away from my 11th birthday in 1972.  Even someone my age knew Nixon was going to win in a landslide.  Nixon was riding high.  Man was walking on the moon.  The Vietnam nightmare was ending.  The Democratic Party was a mess, having lost some of its biggest stars.  McGovern's convention was a disaster.  A rules fight pushed McGovern's acceptance speech to the early morning hours.  His first choice for vice president was suspect.  His second didn't add much to the ticket.

Yet, McGovern pressed on.  I could imagine how difficult that was-- the speeches, the travel, the handshaking, the money raising...  all for an effort you know is doomed.  I respect that.

Here's a paragraph I pulled from the NY Times obituary, and it says a lot:

On election night, Mr. McGovern did not bother to call Nixon. He simply sent a telegram offering congratulations. Then, he said, he sat on his bed at the Holiday Inn in Sioux Falls and wrote his concession speech on hotel stationery.


Did McGovern hold out hope that he would win the election?  He didn't prepare a concession speech until after it became clear he had lost.

It reminds me of Walter Mondale's visit to Wilkes-Barre, just days before the 1984 election-- my first as a broadcast professional.  I covered his Public Square speech for WARM 590.  Everyone knew a pasting from Ronald Reagan was just days away.  Mondale, on a chilly afternoon, did his best to capture the hearts, minds, and votes of people here in our area.  It didn't work.  He tried.  It had to be tough.  Polls showed a Reagan landslide was fait accompli.

As for McGovern, he returned to the senate, fighting for liberal causes.  After he left Washington, McGovern worked with agencies aimed at ending world hunger.  He might have suffered one major and unforgettable defeat, but there were many successes on his journey.