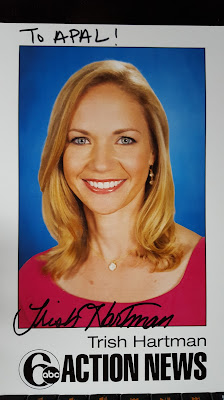 I didn't write a blog entry when Trish Hartman left WNEP because, honestly, we weren't all that close.  I always liked her, but we worked different shifts, different schedules, different assignments.  I never got to know her.

I will pass along this story from Trish's final night.  She walked over to where I was seated, all teary eyed and said "I'll never see you again."  To which I replied "This is a good thing."  We both got a laugh out of that, and we went our separate ways.

There was some contact over the last couple of years-- an occasional Tweet or e-mail.  I'm glad we kept in touch and I hope the feeling is mutual.

Trish recently started working at WPVI ABC 6 in Philadelphia, one of America's great television stations.  The station, obviously, has publicity photos.  Trish Instagrammed that hers had arrived.  I responded that I wanted an autographed copy, and it appeared in my mail box the other day.

I'll level with you.  A lot of people have gone through our town who have moved on to bigger things.  Many have baffled me.  I just didn't see it.  Not Trish.  She's major market caliber and WPVI realized that.

I'm glad we were on the same team for a while.

And, an APAL blog wouldn't be complete without some sass and snark.  Trish signed her first and last name.  Did you think I wouldn't recognize you?  And, thanks for the warm message, "To APAL!"  I'm touched and having difficulty holding back the tears.
AT 12:00 AM