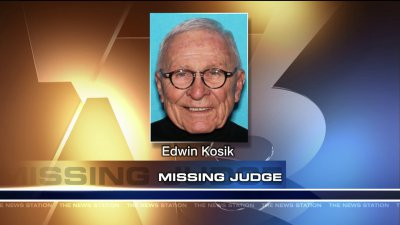 He served Lackawanna County and the federal government.  Judge Edwin Kosik was an outstanding member of the bench.  I'm thrilled and relieved that he was found safe Thursday evening.

My first encounter with Judge Kosik was on my last day of high school.  He spoke at the commencement.  I remember he was funny and charming.  Unfortunately, I can't come up with any quotes.  Commencement addresses are vastly overrated.  All everyone wants is to get their diplomas and get out of there.  Nothing personal.

Kosik was a no nonsense, get it done judge.  He had a sense of humor, but there was no fooling around.  I vividly remember a proceeding for accused killer William Dean Christiansen back in the 80's.  I was on the radio at the time.  Christiansen was a suspected serial killer who went by a number of aliases.  During that hearing before Judge Kosik, Christiansen insisted on calling himself something else.  Kosik said, and this is a quote I can remember "You can call yourself Rose for all I care."  It made for an entertaining radio report.  It's too bad cameras and microphones are forbidden in Pennsylvania courtrooms. Christiansen was found guilty.  He died in prison.

I was almost a little disappointed when Kosik was appointed to the federal bench.  When you had a Kosik hearing, you know it would be done on time, quickly, and efficiently.  Law students should study his work-- and learn.  Other judges should adopt the Kosik style.