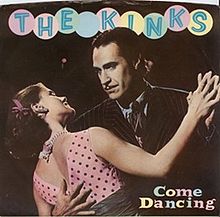 I was on one of my midnight adventures recently, driving down Interstate 81, when "Come Dancing" by the Kinks came on the radio.

I'm not a huge Kinks fan, but who doesn't love "Lola" and "Catch Me Now, I'm Falling" is an all time favorite.

Music has the power to take you to a place and time, and "Come Dancing" always does that.  The year was 1983.  At various times during my early years at WARM, I was the overnight DJ.  I did it for several weeks at a time-- usually because someone quit, was fired, or was out on sick leave.

When Steve St. John was the music director, he added "Come Dancing" to the "current rotation."  It was like a breath of fresh air-- a contemporary, bouncy, fun tune.  Steve was great at his job, and he really tried to freshen up the sound of a fading radio station.  For a long time, in the late 70's and early 80's, WARM played some of the most tired, stale songs out there.  Yes, people listened to WARM for the news, information, and personality-- but prior to the talk radio days, music was the big part of the product.

I remember playing "Come Dancing" toward the end of my shift.  One of the morning news people, Kitch Loftus, walked into the control room to ask about the strange music that was coming out of her radio.  Kitch, like many others, was used to the dreck.

I should add that "Come Dancing" was a DJ's dream.  It was almost exactly four minutes long, making it a great song to sue to backtime in to the top of the hour newscasts.  Yes, young broadcasters, there was a time when you picked your own music, and a computer didn't do all the timing for you.  We were all experts at doing 60 based math.

To make a long story sad, Steve eventually left.  I moved over into full time news.  The music became dull again, until program director John Hancock arrived in the mid 80's.  Management way back then made some horrible decisions, and now WARM is barely a blip on the radar screen.