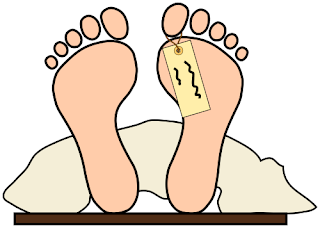 Here we go again.  There are allegations of shenanigans in another county coroner's office.  This time, it's Monroe.  I hasten to add that the mere filing of a suit is not indication of guilt-- not by a long shot.  It's some strange stuff, and it will be interesting to see how this one plays out.

Issues with coroners are nothing new around here.  Coroners in Lackawanna and Lycoming Counties were accused of stealing from the dead.  It was a sad story, especially in Lackawanna, where the coroner was one of the most media friendly I've ever encountered.  Translation:  he answered the phone and gave you the basic information you needed in a timely basis.  Note that this was long before email and the internet.

Being a coroner is a 24/7 job and yet, I've been amazed at how many in the position don't understand that.  I desperately try to avoid phone calls in the dead of night, pardon the pun.  There are times it's unavoidable.

We recently received an email from a county coroner, complaining about a late night phone call that woke the kids.  No, the call didn't come from me or my station.  When I read the email, one thought popped in to my head.  Sorry.  Late night calls are part of the job.  I later learned the subject of the call.  It could have waited until the morning.

As most of you know, the news business has changed over the years.  It's no longer just the morning paper, the afternoon paper, and the 6 O'Clock News.  To quote a famous radio station, the newswatch never stops.

We have a few county coroners around here who seem to get it.  They put out an email as soon as there is information to release.  Therefore, no phone calls at odd hours.  Some are really good at scenes where bodies turn up.  If it's a suicide, they tell us right away.  We don't do suicides.  We leave quickly, sparing the family additional grief.

I remember speaking with a coroner who was relatively new to the job.  There is a state association of coroners.  He suggested the association hold a class or seminar on how to deal with the media.  He was afraid he'd say something that would jeopardize the investigation and/or prosecution.  I don't think the association ever took him up on the suggestion.

Coroner is an important job.  You have to deal with several constituencies-- the public, police, prosecutors, media...  In Luzerne County, it's now an appointed, rather than an elected position.  Most of these men and women are great, but like most things, all it takes is a few bad apples to ruin everyone's reputation.
AT 12:00 AM