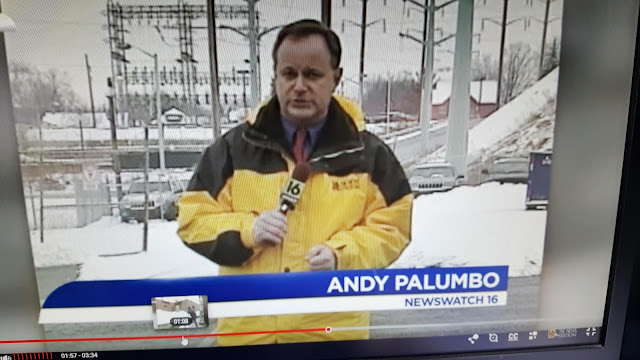 I'm glad we did it back then, and again Monday night.

One of our neat little Newswatch 16 features, from time to time, is Video Vault.  We go back in to the archives and pull out a story we did years ago, with some relevance to today.  As you saw in this space Monday, it was the 25th anniversary of the coldest day on record at Wilkes-Barre/Scranton International Airport.  Before my shift was over Monday, I reminded managers and the 7 PM producer that I did a story on the tenth anniversary of that frigid day.  If time allowed, it would make for a great Video Vault.

As I noted on Facebook this week, when the story originally aired, I didn't like it.  It wasn't a grabber.  It was missing something.  To refresh, I dug into the WNEP 1994 archives and attempted to catch up with people we covered.  I found a few, including a heating oil company worker and a letter carrier with a frostbitten finger.  A PPL executive and morning meteorologist Mark Sowers rounded out the piece.

As I watched the video again this week, I realized it was a pretty good story, and I was very hard on myself way back when.  A little humor, a little information, a lot of good video, and some nice editing from now retired WNEP photographer Tom Hovey.

We received an e-mail the day after the Video Vault aired.  It was from the daughter of the heating oil company worker.  He passed away a year after the 10th anniversary piece.  She enjoyed hearing and seeing her dad again.  The e-mail made my day.

As I have said before, we parachute in to people's lives-- sometimes, on great days for them.  At other times, it's an awful day.  And then, we're gone.  It's nice to catch up and relive some memories.
AT 12:00 AM