Skeptical in the Snow 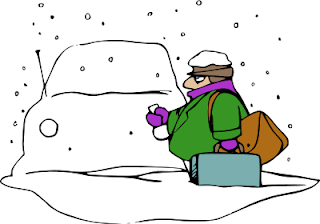 A bill passed the state senate appropriations committee this week.  It gives police the discretion to pull over cars and trucks, carrying accumulated snow, that pose a danger.  As it stands now, police can cite you if your snow and ice flies off and hurts someone.

The bill's heart is in the right place.  It was prompted by the death of a Northampton County woman several years ago.  Ice flew off a truck.  It slammed into the windshield, and the driver was killed.

Should every car and truck, especially the big rigs, be cleared of snow and ice before they hit the road?  Absolutely?  Is it practical to do so?  No.  Do police have the time to pull over every car and truck with an accumulation of snow?    Negative.

A similar bill made it through the state senate last year.  It died in the house.

I wouldn't be surprised if this one met a similar fate, even though it's a great idea.
AT 12:00 AM