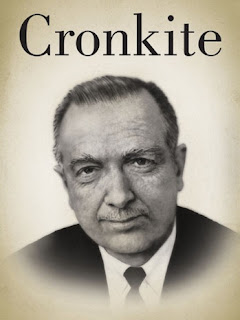 What could be more American on Independence Day than a review of the new Walter Cronkite biography from Douglas Brinkley?


I haven't enjoyed a book this much in a long time.


"Cronkite" follows the journalism legend from his birth in Missouri, to his passing in New York City three years ago.


This is more than one man's story.  It's America's story-- from the post World War I days, to the depression, to World War II, Korea, the space race, Vietnam, Nixon, and modern U.S. life.


Cronkite started his career by working for newspapers and United Press.  Brinkley makes it sound so romantic-- with typewriters, and teletype machines, and deadlines, and late nights, and early mornings.


Radio followed.  Then, of course, television.  Walter Cronkite helped invent TV news as we know it.  He became the "most trusted man in America."  CNN founder Ted Turner once referred to Cronkite as "the one guy on TV no one ever got sick of."


The book exposes Cronkite's flaws-- like a love for the night life, enthusiasm for the Kennedys and NASA that bordered on unobjective cheerleading.  He was also late to understand Vietnam was a huge mistake.  Cronkite could be a tough man to deal with.  He didn't like sharing the spotlight, and he had his share of pet projects that drove his co-workers crazy.


Through the book, we learned this broadcasting god is human, and we're all okay with that.


Walter Cronkite gave up the CBS Evening News chair in 1981, so I can't see anyone under 45 really enjoying this book.  Still, there's enough behind the scenes gossip to spice it up.


I usually get a feel of satisfaction when I finish a book, especially one as thick as "Cronkite."  I had an odd feeling when I turned the last page.  I was sorry there wasn't more.﻿
AT 12:00 AM