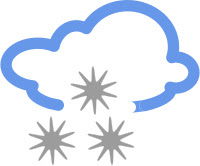 It was in the air.

It was the unmistakable aroma of snow anxiety.

Let me back up a moment.  I had a few moments to kill, so I blew through one of the malls.  I really didn't need anything, but I can't resist a shirt and tie sale, so I had to check out one of the department stores.  Miracle of miracles, I walked out empty handed.  Those who check my Facebook page, @AndyPalumboWNEP, (words I never thought I'd say) know I've been trying to add a little variety to the dress shirt area of my closet.  The store had some really nice things, and lot prices, but a little too wild for me.

Here's where it got really interesting.  I had to stop by two supermarkets.  Keep in mind, I'm not one of those people who will drive ten miles out of my way to save a nickel on a pound of butter, but one store had a special on a few things I needed.  The other has really good take out dinners.  Luckily, they are fairly close.

Both stores were more crowded than usual.  Of course, Tuesday Senior Citizens Day had something to do with it.  The other part of the equation is snow in the forecast.  It's not a crippling storm.  The snow looks just enough to be a nuisance, and just enough to crowd the aisles and parking lots a little more

I'm one of those people who believes the media reflects trends, not influences them.  I don't know how this whole "snow storm anxiety" thing started.  I will admit that I do fall victim to it, on occasion.  This wasn't one of those times.  I got what I needed, at both stores, and blew through the express check outs.  Two for two.  I should have played the lottery.