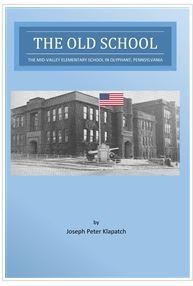 My internet friend, Joseph Peter Klapatch, wrote a book a couple of years ago.  It's called "The Old School," and it deals with the history of Olyphant Schools and the start of the Mid Valley School District.

Regular blog readers know I hated just about every second I spent in two schools in Olyphant.  The building you see on the book's cover was condemned in 1976.  It should have happened a lot sooner.  You don't see the building just across the street, with all the warmth and charm of a state prison.  While a few faculty members were outstanding, there were so many who were lazy, angry, and burned out.  I questioned why they chose teaching as a profession.

I learned something by reading the book shortly after its publication.  Back in the day, towns put the big money into junior high schools-- not the high schools.  The reason was that a big percentage of the boys quit after junior high because they had to help support their families.  Junior high was their last schooling.

Don't ask me how, but I did manage to graduate.

As I was prattling on about education yesterday, I gave some additional thought to Joe's book.  While I had a few great teachers at the senior high level, some really influential ones were at the junior high.  That's good and bad.  Two out of my three math teachers were simply awful.  It's not the only reason, but it's a factor why I'm not a fan of math.

On the other hand, I had three great English teachers at the junior high, then located in Dickson City.  Guess who writes for a living?  I have no idea where to find one teacher.  Another passed away.  I tried contacting the third late last year.  It didn't work.  I'll try again.  A "thank you" is long overdue.

To review, I'm a single and childless individual.  I don't know what's going on in junior highs and middle schools.  I do see so much "career oriented" activities in high schools, and that's great.  I wonder what's happening in the earlier grades, and I hope it's starting the nudge toward jobs, careers, and dreams.
AT 12:00 AM