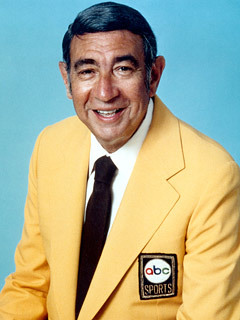 Last week, March 25, was the 100th anniversary of the birth of Howard Cosell.

Few sports broadcasters have had such a huge impact on American culture.  He might be at the very top.  Every impressionist did Cosell.  He made Monday Night Football must-see-tv.

I always felt Cosell's biggest contribution wasn't Monday Night Football.  It was ABC SportsBeat.  It was like a TV news magazine, but devoted to sports.  it was the serious journalism the sports world needed.  Unfortunately, it didn't last long.

The man is a legend.  for years, Cosell did an afternoon radio commentary for the ABC networks.  I read where he would walk in to the booth, without a script, deliver the commentary, and bring it in exactly on time.

In a fascinating biography, I learned Cosell was motivated by looking for approval from an absentee father, which he never received.  There was also a huge desire to be known as more than just a sports guy.  There was a short lived variety show on ABC.  He also talked with ABC News and Sports president Roone Arledge about anchoring news broadcasts.  It never happened.

Was I fan?  Yes, partially.  There were many times when Howard Cosell was hard to take.  He was angry, bitter, and cynical at the end of his run.  You can't deny his talent.

Most of all, Howard Cosell was a man of courage and conviction.  He took unpopular stands and didn't back off.  I admire that.
AT 12:00 AM