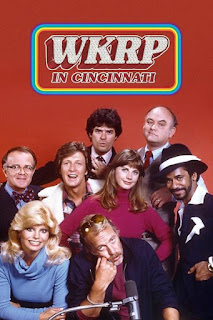 WKRP in Cincinnati premiered on CBS 40 years ago this week.  Coincidentally, it happened at the same time I entered college as a fledgling broadcaster.

90 episodes over five seasons.  CBS never seemed to know what to do with it.  The show was moved around the schedule several times.  It was nearly impossible to find.

I always use the word "uneven" to describe the series.  Some episodes were outrageously funny.  The rest, just meh.

Personal favorite:  "Baby, It's Cold Inside" from season three.

I always thought Jan Smithers was infinitely more attractive than Loni Anderson, who was nothing to sneeze at.

The Johnny Fever, Les Nessman, and Herb Tarlek characters were dead on accurate.  I worked with all of those guys at one time or another.

I also worked for Art Carlson.  He was president of Susquehanna Broadcasting, owner of WARM, during my time there.

Bucky the engineer was an underrated and under used character.

It's not Thanksgiving until I see the main scene from "Turkeys Away."

I had made up my mind to get into broadcasting long before WKRP appeared.  It just erenforced my decision.  This can be a fun business.