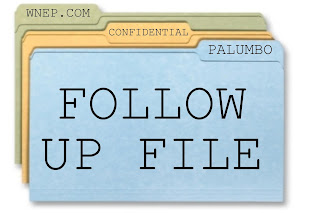 Some recent blog and Facebook entries on Scranton and Wilkes-Barre's lack of a New Year's Eve celebration triggered a social media discussion.  By the way, thank you for the mention, David DeCosmo.

Let's start with Scranton.  "First Night" was a wonderful and ambitious undertaking.  I know people who loved it.  I can't say I was ever there, but TV news video of many of the venues showed a lack of people.  It was a little too artsy, too spread out, and it took too many volunteers to run effectively.  I can understand why it went away.

What I can't understand is why there isn't anything to replace it.

Lackawanna County prepared an ambitious agenda a couple of years ago.  The county, wisely, cancelled it because of severe cold.  I was supposed to cover it for Newswatch 16.  Instead, I went to Pottsville for the raising of a giant Yuengling bottle in Garfield Square, and had the time of my life.

There has to be something for people to do that doesn't involve getting a snoot full of liquor and paying high prices in a club or bar.

Let's turn to Wilkes-Barre.  The annual Public Square diamond drop was cancelled several years ago.  The mayor at the time said the city couldn't afford the police overtime.

If there was ever a city with a public relations problem, it's Wilkes-Barre.  Did you watch the TV news last week?  Did you see the preview stories done on New Year's Eve celebrations in Sunbury and Tamaqua, to name just a couple.  Wonderful, positive coverage of places promising to be light and bright for the start of the new year, with optimistic futures.

A New Year celebration in Public Square would send the signal that downtown is safe and entertaining, with plenty to see and do.  The city looks forward to its future, not dreading it.

And, it's not just the larger cities.

Dunmore cancelled its "Buck Drop" because it didn't want to compete with "First Night Scranton."  I get that and respect that.  "First Night" is gone and it's never coming back.  Bring back the "Buck Drop."

Our sister station, WPMT 43, in Harrisburg recently did an internet story on all the central Pennsylvania celebrations.  The same goes for PennLive.com.  Small towns having fun and ringing in the new year.

And while I'm at it, Stroudsburg is putting in a temporary ice skating rink next to the courthouse, and Pottsville is planning its WinterFest.   PEOPLE WANT FUN THINGS TO DO DURING THE LONG, DARK AND COLD PENNSYLVANIA WINTERS!