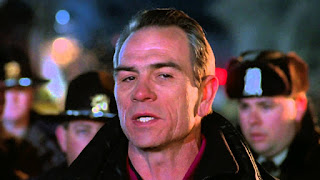 The only thing I know about acting is "I can't do it."

I do pick up on little things now and again.  Acting is more than lines.  It's movement.

I've seen "The Fugitive" at least a dozen times, a vastly underrated film.  As I've said before, you know a movie is good if you know the ending beforehand, and it still captures your attention.  A fabulous piece of film making called "Quiz Show" is a perfect example of that.  So is "Apollo 13."

Anyway, back to my point.  Just watch the way Tommie Lee Jones moves throughout "The Fugitive."  Such confidence.  I call it the "swagger."  If you want another example of that, watch my all time favorite movie, "My Favorite Year."   Just watch the way Peter O'Tole glides from scene to scene.  Here is a man who lives on the edge.  His world can crumble beneath him at any minute, and he walks with supreme elegance and confidence.

A tiny part of me was always curious about the performing arts.  Maybe some day, I'll give The Swagger a try.
AT 12:00 AM