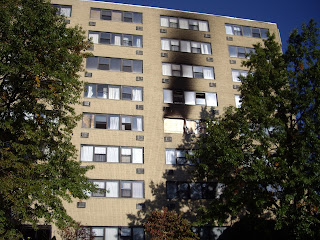 It must have been a nightmare. Fire broke out Sunday morning in a fourth floor apartment at the Sherman Hills in Wilkes-Barre.

I got my first up-close look at the building Tuesday morning, and I talked with a few people. They were universal in their praise of the Wilkes-Barre Fire Department. Department personnel helped get one hundred people out of their apartments. Many residents are elderly and handicapped. Some needed medical attention. There were no fatalities.

The fire was right in the middle of the building. Apartments above the fire have smoke damage. Those below have to deal with a lot of water. The clean up began yesterday. The building manager hopes to have some people back home by the end of the week, and that's amazing.

I'm looking for the right words to describe the evacuation. It's been said luck is the residue of design. The building held fire drills. Residents and the fire department knew exactly what to do. That's more than luck. It's smart.
AT 12:01 AM