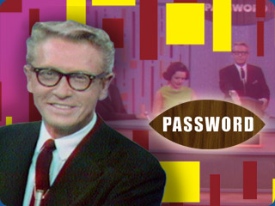 Last week, I whined that I didn't have any truly inspirational teachers during my time in the American educational system.

So, who did inspire me?  Who did I admire?  The list is rather short, and I really should feature them from time to time in this space.

Allen Ludden is on the list, and I'm not afraid to admit that.  Ludden passed away from cancer and a stroke in 1981.  He hosted several game shows along the way and is best known for "Password."

Here's why I admired Allen Ludden.  The game came first.  He never tried to top the contestants and celebrities.  He wasn't one of those "it's all about me" guys.

Above all, I admired Allen Ludden's enthusiasm.  He presided over thousands of "Password" episodes, and every time he walked out on that stage, he looked like he was having the time of his life.  I'm sure there were days it wasn't easy, especially toward the end when his health was failing.  On top of that, "Password" wasn't the most exciting game in the world.  Even if Ludden had to push it a little, he always seemed genuine.

Allen Ludden and I are both broadcasters, but in slightly different specialties.  He doesn't deal with tragedy on a daily basis.  His biggest issue was a contestant botching the "Lightning Round."  However, when things are going bad, I try to remember the professional gentleman I saw on TV as a kid.
AT 12:00 AM