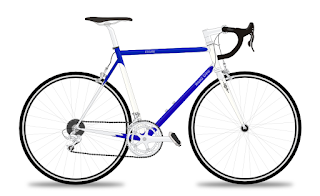 Yes, I've surrendered to colder weather, and there are a few items to illustrate it.

First, I've mothballed my bike for the season.  As regular readers know, I ride early in the morning, and only when it's above 50 degrees.  Looks like our 50 degree mornings are over for a while, so my chain has been lubed and the bike is under cover for a few months.

It's been a mixed season.  I've ventured out on fewer rides, but for longer distances.  Most rides have been in the teens and twenties.  I topped out at 31.3 miles a couple of months ago.  On the other hand, the weather this summer was awful.  Too rainy.  Too hot.  Too humid.

The stationary bike at the gym will have to do for a while.

I took the air conditioner out of my bedroom window last week.  Thanks to a little weight lifting at the gym, it was a breeze.  It goes in around primary election day, and it comes out around Halloween.  My bedroom gets the afternoon sun, and I have to sleep during the day, so a little air conditioning boost is badly needed.

Third, an internet work wear/outerwear company makes something called a "grab jacket."  It's light enough to be comfortable, but it provides winter style warmth.  I usually don't "grab" it until late November or December, but I wore it when temperatures dropped in to the twenties the other morning.  If you know the company I'm talking about and you're considering getting one, I strongly recommend it.  The sleeves are roomy.  The coat is cut long.  It's well made.  Love the coat.  Hate that I had to wear it so early in the season.