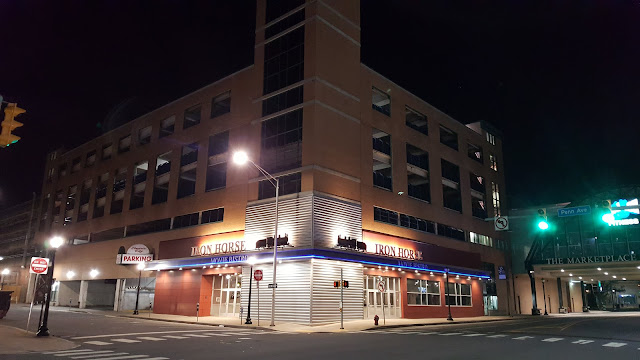 Cosmic Cinemas will try to do what at least three other companies have attempted-- run a successful movie theater operation at Penn and Lackawanna in downtown Scranton.

Cosmic is a relatively new outfit, and intends to follow, somewhat, in the same footsteps as its predecessor-- the Iron House Movie Bistro.  The plan is to offer more than a movie.  dinner and drinks is part of the package.

It's worked in other places.  Not here.  I never visited Iron Horse.  When I go to a movie theater, I want to see a movie.  When I go to dinner, it's in a restaurant.  Combining the two never appealed to me, but I can see where that would be a draw.  To be fair, I have spoken with people who have experienced the concept, here and elsewhere, and they loved it.

In my book, it comes down to location.  I just get the feeling that people don't want to watch movies in an urban atmosphere, and deal with parking garages-- even if you can park for free with a validated ticket.  It's way too easy, and some perceive much safer, to roll up to a megaplex, not deal with a parking hassle and watch a movie.  You can grab a bite, before or after, at one of the dozens of restaurants that surround the theaters.  You really have to consider location as a factor as to why all the others here failed.

I really hope Cosmic does something with the design.  It's a dark downtown corner.  There isn't a lot of color at the theater entrance, and that big hunk of corrugated metal isn't very inviting or visually interesting.  Jazz it up.  Brighten it up.  Make it a "must see" destination.  You can see movies in a lot of places.  Make this one special.

Iron Horse lasted nine months.  We'll see if Cosmic Cinemas can do better.
AT 12:00 AM