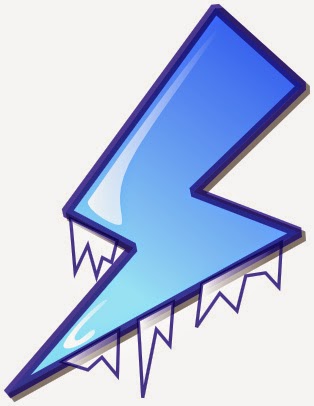 Just a few thoughts on the current blast of winter...

I got up early Saturday night so I could take my time going to work.  The snow was falling.  Streets and roads were slippery.  After traveling a couple of miles, I realized it wasn't as bad as I had feared.  To avoid getting to work too early, I stopped at a fast food restaurant for a burger and fries.

I'll give you a hint.  it wasn't at the golden arches, and it wasn't the place where the little red haired girl works.  I had the chain's signature sandwich and fries.  I hadn't been there in months.  The sandwich wasn't as good as I remembered and the fries lacked any real potato flavor.  the stuff was hot and fresh, but still disappointing.

I slid once on the way to work.  Otherwise, it was an uneventful trip.  when storms hit, I avoid the interstates.  There have been too many close calls with speeding trucks over the years.  the leisurely pace of going through city and borough streets is more to my liking.

Yesterday's blog entry was about Newswatch 16 Sunday Morning, so I'll jump ahead to the ride home.  The wind was horrendous, and it was blowing snow all over the road.  I did take the interstate.  The main lanes were great.  The exit ramp was simply awful.

I have a habit of laying out my Monday work clothes on Sunday afternoon, but I didn't do it this week.  I think it was denial.  If I didn't gather my extreme cold weather gear, the cold really didn't exist.  Nice try.  Fortunately, my extreme weather clothing is always close at hand, and it didn't take long to assemble the needed garments before I showered and headed to the office.

When I got to work Monday, I discovered my first assignment would to wrap up weekend electricity issues.  Frankly, I'm surprised it wasn't worse.  High winds, snow, ice...  Thousands lost power for a while Sunday, but most were back on line Monday.

As soon as my morning broadcast duties ended, I grabbed photographer Jason and set off in people out in the sub zero cold.  It wasn't hard-- utility company workers, people n Scranton's Nay Aug Park, Marywood students scurrying to class.  The story came together quickly and nicely.  I was only outside for an hour, but that was more than enough.  There are never enough layers when it's below zero and windy.

My day ended at noon, and it would soon be time to do it all over again.