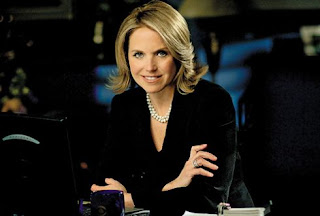 So, Katie Couric is apparently leaving the CBS Evening News.

She was paid lots of money.  No ratings.  Don't cry for CBS.  I was told long ago that no company ever agreed to a contract it couldn't afford.  There's evidence she drove viewers away, rather than attracting them to the broadcast.

There was a time that if you had a network evening news anchor job, you were at the pinnacle of your profession.  I still believe that's true.  Katie feels otherwise.  She wants out, in favor of a syndicated talk show.

Katie Couric is a gifted communicator.  Journalist?  I'm not so sure.

Before you accuse of me of being on a high horse, an evening news anchor gig isn't for everyone.  The evening news hole is about twenty minutes long.  Couric and CBS tried to re-invent the broadcast, with interviews and commentary.  There wasn't enough time to do it right.  It didn't work, but I do give Couric, the producers, and CBS credit for trying.

If you're unhappy in a job, if you don't feel you're being used in the best way, it is okay to step away-- even if you're leaving one of the best jobs in the business.

A talk show is a better use of Couric's talents.

Still, I have a hard time wrapping my head around someone walking away from the Cronkite chair.
AT 12:00 AM