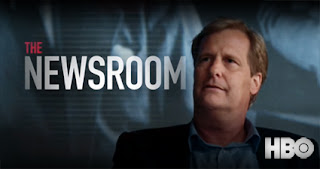 Season two of HBO's "The Newsroom" wrapped up Sunday night, and today, a few thoughts...

I liked the second season a little better than the first.  The characters became better developed, and there was some real drama over the airing of an explosive story and the fallout that came next.

"The Newsroom" is the series where, last year, I kept saying "I'll give it one more episode."  Eventually, I got sucked in, and I eagerly awaited the new one on Sunday nights.  Some of it is realistic.  Most isn't.  It was all fairly entertaining.  It's typical Aaron Sorkin-- a little too talky, a little too preachy.  Jeff Daniels made it work, and I've become a big fan.

The season two finale was a little too perfect when it came to the story.  Everything wrapped up nicely.  It appeared to be one of those endings, written and shot before everyone knew if there would be a renewal.  As it turns out, HBO has green lighted a third season, so it will be interesting to see the direction next year.

There have been many shows, over the years, where I felt as if I wasted my time.  "The Newsroom" is not on that list.
AT 12:00 AM