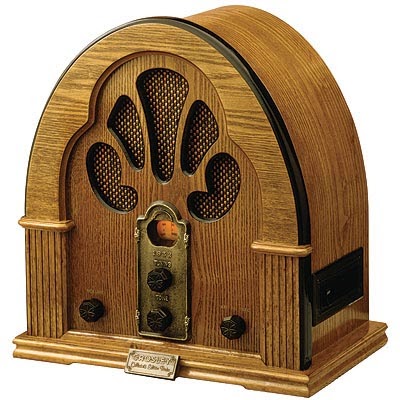 I left full time radio in the fall of 1991, but the medium still fascinates me, and I actually spend more time listening to radio than watching TV.  It's nothing against TV.  I'm asleep during  prime time, and daytime TV isn't aimed at my sex and socioeconomic group, so radio it is.

I dumped my home satellite radio several months ago, and I bought an internet radio I found in a catalog.  It was one of my best investments ever.  First of all, there's no monthly service charge.  If the station streams on the internet, you get it for free.  It's nice to have access to all news stations and sports talk without play-by-play interruptions.

Having laid the foundation, a couple of recent developments piqued my curiosity, and I apologize in advance for being too "inside."

A company called Cumulus and ABC are going their separate ways.  Cumulus distributed ABC Radio News and assorted other projects.  ABC says it will handle a lot of its own stuff now, with some assistance from an outside company.  ABC promises more products for local stations, and I hope that means more news-- something severely lacking these days.  Cumulus is hooking up with CNN to feed raw material to radio stations.  It doesn't look like there will be a resurrection of CNN Radio News, which at one time, was a darn fine service.

A conservative talk FM station in Pittsburgh abandoned the format last week to go country.  Conservative talk was the "in" thing for a long time.  Now, it looks like the bloom is off that rose.  Rush Limbaugh was relegated to a little AM station in Pittsburgh.  Say what you want about his politics, Rush can still put on an entertaining broadcast.  Unfortunately, some of his good natured ribbing of liberals has turned mean and nasty.  The bottom line is it's all money and if the FM Pittsburgh station's management thinks it can make more money with country, the rest all falls in to place.

New York City's dominant "classics" station has phased out all of its 60's music.  I guess the station decided that people who like that stuff are too old to count, too old to matter much.  That's unfortunate.  Sprinkling in one 60's song every couple of hours wouldn't hurt.  The station is turning its back on some fine music.

Robin Williams played a radio disc jockey in "Good Morning Vietnam."  As you no doubt know by now, Williams died Monday.  Suicide.  He suffered from depression and addictions.  I found his serious stuff a lot more entertaining than the comedy.  It's sad and tragic.
AT 12:00 AM