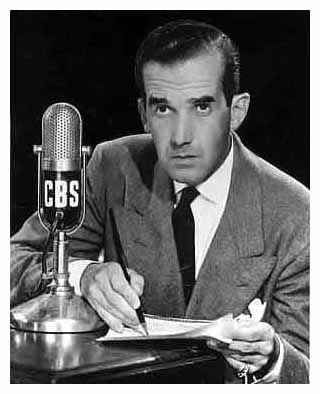 He tried to right wrongs on "See It Now."

Clearly, I was too young to note his work as it was happening, but I've read enough about it.  Edward R. Murrow was simply a fascinating individual, who wasn't afraid of taking on his bosses at CBS or corporate America.

There's some good work going on today, but Murrow was one of a kind.  President Johnson said Murrow dedicated his life to an "unrelenting search for the truth."

In spite of his journalistic genius, I read where Murrow was never really comfortable on TV.  It just wasn't his thing.  Then CBS made its television push, it was Douglas Edwards and Walter Cronkite leading the way.

There are lessons here-- don't be afraid to broadcast the truth, and don't smoke.
AT 12:00 AM