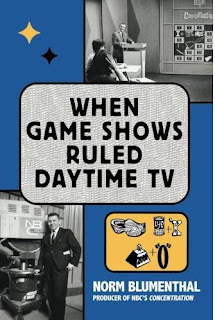 It's been well established here that I love game shows from the 60's and 70's, so reading the book you see above was a natural.  The author was the producer of the original NBC version of "Concentration," Norm Blumenthal.

The first half of the book was great, with tales of the early days of live TV-- the sets, the lights, the props, the big mechanical (and often malfunctioning) game board.

The book then delves into the changes the industry weathered-- going to videotape, competition from big prize and flashier shows, etc.  Blumenthal peters out toward the end, with lengthy paragraphs on how to be a good contestant and what producers look for.

He does name names, but only in a good way.  Blumenthal does talk about bad shows, bad producers, and bad hosts-- but he leaves their names out.  I didn't have a major problem with that.  Many aren't around to defend themselves, and his descriptions give readers a solid idea of what was happening.

A big thumbs up-- but only if you like the genre.  The rest of you might be a little bored.