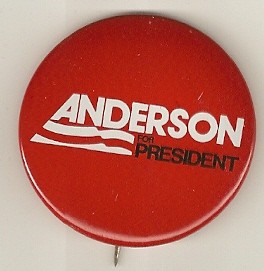 The first election in which I was allowed to participate was the 1980 primary, but this is an entry about that year's general election.

Here were the choices-- Democrat and incumbent Jimmy Carter, a good man who was a Horrible (yes, the capitalization of the H is deliberate) president, Republican Ronald Reagan, who seemed to be a bit extreme-- especially to a youngster such as myself, and independent John Anderson.

For this blog entry, I will make an exception.  I voted for John Anderson.  Some of his ideas, especially on energy, were out there.  For the most part, he seemed reasonable.  Anderson ran as an independent because he though the Republican party had moved too far to the right.  For me, he seemed like a good and sane choice, as centrist as we were going to get that year.

John Anderson captured seven per cent of the vote, and even though I knew he stood zero chance of winning, I walked out of the voting booth a satisfied young man.