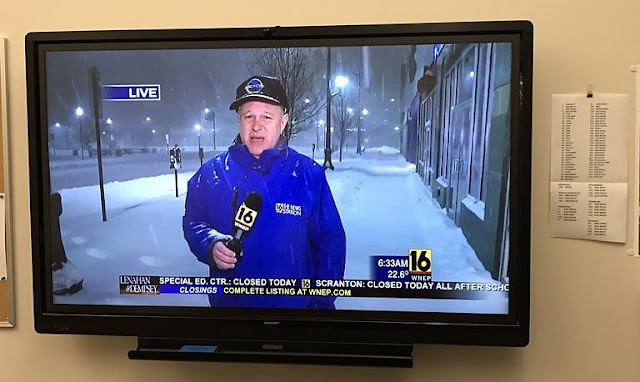 I've been in the news game a long time, and this was the biggest kick in quite a while.  Once again, it was a picture I didn't take.

The photo was taken at the headquarters of the Pennsylvania Emergency Management Agency in Harrisburg the morning of March 14, as the Blizzard of '17 was getting wound up.  I was live, in the snow, on Public Square in Wilkes-Barre.  Photographer Erich Granahan was behind the Newswatch 16 camera.  PEMA was sampling newscasts from around the state so it could get a handle on what was going on.  It was an honor to be on its list.

I am not one of those people who strives for recognition.  I can't remember the last time I entered anything in an awards competition.  It was likely decades ago.  I show up at work every day with the simple goal of doing the best I can.   The rest always falls in to place.  Still, it was nice to be noticed.