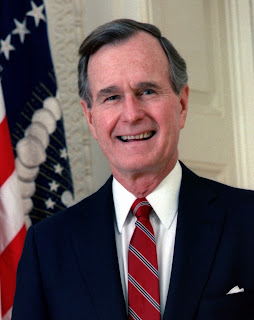 I met George H.W. Bush twice, both while he was vice president.  Once was at Wilkes-Barre/Scranton International Airport.  The other was at a downtown Wilkes-Barre hotel.  Both times, he was campaigning for Republican congressional candidates.  It was a quick handshake and a hello as he worked his way down a media line.  Bush, both times, asked my name and who I worked for.  I was a radio pup at the time, but even I could realize that Bush was a little different than most politicians.  He seemed interested in who you were.

The tributes have been flowing in since the 41st president's death Friday night.  They all have the same tone.  You might not have agreed with his politics, but there were no arguments about his decency.  His humanity.

The thing that strikes me about George H. W. Bush is his public service-- military, congress, the Republican party, the CIA, United Nations, China, vice president, president...  He helped raise millions for charities after he left the White House.  There are few resumes like that left.

I will quote Sen. Bob Dole's line during the Richard Nixon eulogy:  "How American."