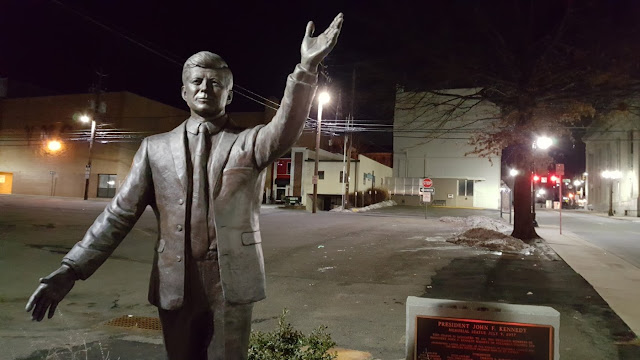 Last month was the 55th anniversary of the JFK assassination.  I was 23 months old at the time, so clearly, I do not remember it.

It still fascinates me.  Cable documentaries turn up all the time, not just around the murder anniversary.  I have a hard time turning away.  I see that even though a big part of me wishes the Kennedys would just be left alone and not be constantly bothered.

Conspiracy theory?  I doubt it.  Something should have leaked by know.  I do believe there are still many unanswered questions.

Above is a picture of the Pittston Kennedy statue, shot in mid January.  They did a nice job with this one.  My only tiff, and it's a minor one, is the location.  I know it's meant to greet people traveling over the Water Street Bridge from West Pittston, but the statue is at the corner of a rather unattractive parking lot.  A little landscaping would go a long way.
AT 12:00 AM