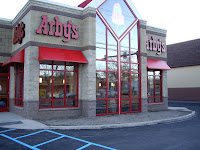 We have a few business items on our plate today...

A new Arby's on Pierce Street in Kingston opens today. It replaces a store next door that was more than thirty years old. The Pierce Street Arby's was one of the first, if not the first, in the area, and it was of the original design. I'm sorry I didn't get there to take a picture while it was still standing. I remember going there with my parents when I was a wee lad, and being annoyed because Arby's didn't sell hamburgers. I grew to love the roast beef sandwiches, and little kids are not normally roast beef fans. The building had an interesting layout. There were chairs and fold down tables around the perimeter of the inside, almost like school desks. I know it's only a building, a fast food joint, but a lot of memories came tumbling down when that restaurant was demolished last week. It wasn't the food. It wasn't the decor. It was happy times with the family, when piling in a car and driving 45 minutes to a different kind of fast food restaurant was a big deal. Apparently, a lot of you cared because it was one of the highest viewed items of the week on WNEP.com.

Of course, when I think of Arby's, I think of those trips there with the folks, but I also think of an episode of "The Simpsons." It was their "Lord of the Flies" take-off. The kids were stuck on an island after a school bus crash. One of the Terri/Sherri twins says "I'm so hungry, I could eat at Arby's." Hilarious.

A number of newspapers, including the Wall Street Journal, report Steve and Barry's is going out of business. I was at the Steamtown Mall store Saturday, during their "liquidation" sale. It smelled a lot like a going out of business sale. I grabbed a couple ties-- two for $15. I'd purchased ties there before-- cheap and well built, nice and beefy.

I liked Steve and Barry's. The clothing was inexpensive. You get what you pay for. The stuff wasn't going to last a lifetime, but it filled a need. Losing the chain means a big blow to a few shopping centers here in our area. Steve and Barry's was a Steamtown Mall anchor. It occupied the bridge that the Globe Store had when the mall opened in 1992. Steve and Barry's is also a big tenant at the Schuylkill Mall and one of the last stores in Wilkes-Barre's East End Center. Friends, this one hurts. I can't think of any other major chains that will come in and take that space, especially during a bad economy.

If that isn't enough to frighten you, consider this. The Chicago Tribune reports that if Sears doesn't have a good Christmas shopping season, it may not make it through 2009. There are few things more "American" than Sears, and if it goes, it really shows how much the nation's economy and buying habits have changed. 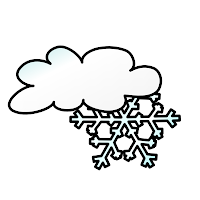 PennDOT put out a news release yesterday. It advises driving carefully during snow squalls. Thanks for the information.

And finally, I BELIEVE the people who inhabit the offices of Wilkes-Barre City Hall received a big reminder this week that what happens here IS the people's business. A federal jury awarded a city resident $67,000 because the mayor violated the resident's first amendment rights. That resident was fighting the closing of a fire station. The mayor apparently tried to put the screws to the resident by sticking her with the city's legal fees. The fees were rung up as the city opposed a "keep the fire station" petition. Testimony at the trial was shocking and saddening at the same time. It was clear the city was trying to make it too expensive for the resident to continue the fight. Guess again! I hope the people involved learned a lesson, but as always, the taxpayers will get stuck with the bill.
AT 12:01 AM