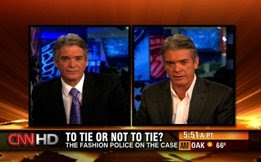 John Roberts anchors "American Morning" on CNN. He appeared without a tie one day last week. I'm a big John Roberts fan. CBS made a mistake letting him get away a few years ago. He should have been given the CBS Evening News anchor job over Katie Couric.

Having said all that, and at the risk of appearing hopelessly old school, I didn't like the tie-less look. "American Morning" is the "newsiest" of the cable and broadcast morning shows. It's a relatively serious broadcast. It's not "Entertainment Tonight." He should have worn a tie. I'm okay with shedding a jacket. I frequently do that myself. Take off the tie if you're doing a feature, or if you're standing in a hurricane or snowstorm. Keep it on the rest of the time.

I may throw caution to the wind one of these mornings and go tie-less myself to see what it feels like. You never know.

Philadelphia Eagles quarterback Donovan McNabb has been catching some heat recently for not knowing regular season NFL games can end in a tie. I'm not a McNabb fan. Far from it. He's not a winner. However, there have been only two NFL ties in 13 years. I can understand how and why he didn't know the rule. This isn't a big deal to me, and take it easy on the guy. Let the coaches worry about the rules. Let Donovan throw the ball.
AT 12:01 AM