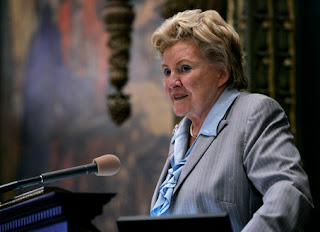 Lieutenant Governor Catherine Baker Knoll passed away Wednesday evening. She was 78, and had been battling cancer.

I'm not going to say I knew her, but we did meet several times over the years. The first was in a wooded area of Hanover Township, back in the early 90's, when she was state treasurer. CBK was presiding over the groundbreaking of a new townhouse complex. The neat thing about it was your rent would eventually go toward ownership of the unit. It was a new program, and from what I understand, it worked quite well. Someone I later worked with someone who took advantage of the program. He lived there for many years, and he was quite happy.

A lot of kids will be able to afford college because Catherine Baker Knoll set up a program to help their parents save.

Catherine Baker Knoll wasn't Ed Rendell's choice for a running mate. Under the state system, we vote for governors and lieutenant governors separately in the primary, and that's how the two teamed up.

CBK seemed to be a nice woman, but I get the feeling she stuck around on the stage a bit longer than necessary. There were some famous gaffes while serving as the state's second in command. There was a revolving door in her office, meaning frequent staff changes and turmoil.

When the final history is written, I suspect the positives will far outweigh the negatives, and Pennsylvania is a better state because Catherine Baker Knoll was one of its public servants.
AT 12:01 AM