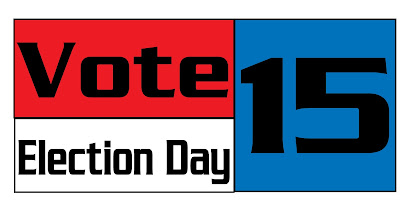 I've been covering elections for 35 years, and I still get the same feeling on Election Day morning-- a slight queasy feeling in my stomach, a combination of worry and anticipation.

Worry, because an Election Day is like the Super Bowl of news.  The days are long.  Stakes are high.  Reputations can be made or destroyed.

Anticipation because, although I know how most races will turn out, there is always a surprise, or two, or three.  You never know, totally, what way it will fall when the last vote is counted.

And yes, even after all those years, election days are still fun-- although my news responsibilities end long before the polls close.

Barring breaking news, I'll be previewing some big races for Newswatch 16 This Morning.  It's then a tour of polling places to check turnout and look for problems.  As I noted yesterday, this election, like all elections, is important.

I'll try to get the blog updated during the day.  Look for a Tweet, Instagram, and maybe even a SnapChat if time permits.

Please, remember to vote.  Polls are open from 7 AM to 8 PM.

>>> 2:35 AM UPDATE:  I really wasn't hungry, but tradition is tradition.  I stopped for my usual spicy chicken election day morning sandwich on the way to the office.  Mediocre, at best.  The 24 hour truck stop  fast food outlet that sells it is the absolute worst of its chain.  They were out of tomatoes!  Tradition once again.  It's time for one last check of the prepared preview pieces.  Then, it's time to hit the road.

>>> 4:40 AM UPDATE:  First live shot of the day completed.  At least five more to go, plus interviews, writing, editing, etc...  No complaints.  I always enjoy election days, in spite of the sorry and stress.  Democracy in action.  We're so fortunate.  We're back on Coal Street this morning to focus some of our efforts on the mayor's race.  I like it here.  It's a busy polling place with plenty of parking.

>>> 9:20 AM UPDATE:  Moved in to Scranton for a check on numbers there.  More people handing out cards than voters.  One candidate for a major office told me it's slow in most places in Lackawanna County.  Back at the office now to work on a piece for noon.

>>> 10:30 AM UPDATE:  Written and voice tracked.  Editing of the noon story is underway.  Still getting reports from around the area of light turnout, even areas with hotly contested races.

>>>1:20 PM UPDATE:  A flurry of activity-- finished the noon piece, ran out to do a noon live shot, went home, voted, warmed up some leftover Chinese food, and here I am.  Special thanks to Newswatch 16's Jim Hamill and Alicia Nieves.  Both supplied voter turnout numbers from their respective beats-- Pike County and Hazleton.  Pike County was busy.  Hazleton, not so much.  Hazleton was a bit surprising, considering there is a spirited three way race for mayor.  Pike Countians are interested in the contest for District Attorney.  It should be a fascinating night, but my day is done.  I hit the door at 2:30 AM and arrived home ten yours later.  No big deal.  Long hours come with the job, and it was a most interesting day.  It's time to do a little web surfing, then a nap so I can watch the returns tonight.  Check this space later and tomorrow for updates.  Thanks!

>>>10:55 PM UPDATE:  One eye on the computer, the other ont he TV since polls closed at 8 PM.  While I miss the fun of an election night in the newsroom or at a candidate's HQ, having all the numbers at my fingertips is still a rush.  I'm working on tomorrow's blog entry, which hits in an hour.  Quick summary:  winners and losers not surprising.  Margins of victory are.  Some races were blow outs, others were squeakers.  It's still far from over.