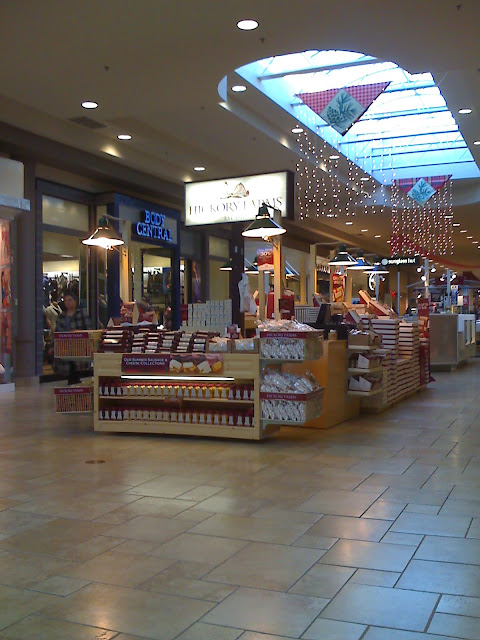 I know the Christmas season is officially here when I see the Hickory Farms kiosk pop up in malls throughout our area.  I took the above photo, with my camera phone, Wednesday afternoon, at Viewmont Mall in Dickson City.

Hickory Farms and Christmas are forever linked in my mind, and if you can excuse a long story, I'll tell you why.

Many members of my mom's family moved to Connecticut after the Big War because really good manufacturing jobs weren't available around here.  Not much has changed in 65 years, has it?  Anyway, one of my mother's brothers, my Uncle Al married a woman who became my Aunt Mary.  She was also my godmother.

Uncle Al passed away while I was very young, and I really don't remember much about him.  Aunt Mary remained in Bridgeport, CT.  While I liked my Aunt Mary, I hated those Bridgeport trips.  It was the days before Interstate 84, and getting to Bridgeport meant spending a lot more time in a car than I liked.  Bridgeport in and of itself was a completely different issue.  If you've ever been there, you know what I'm talking about.

Hickory Farms used to have a store at Viewmont Mall year-round.  It was great.  You never knew when you'd need a ball of cheddar rolled in nuts.  As I got a little older, but still a kid, I'd always make sure to set aside a few dollars at Christmas, get to the mall somehow, and send a Hickory Farms gift pack to Aunt Mary.  It was allowance money, and there wasn't a lot of it.  I could never afford the top of the line Hickory Farms assortment.  I don't think the small size of the gift mattered to Aunt Mary.

You have to remember, this was the time before Al Gore invented the internet.  I don't think Gore was even born yet.  Christmas catalogs were from Sears and Penney's, and that was it.  Having someone like Hickory Farms do the packing and shipping for you was an amazing convenience at the time, especially if you were too young to drive to the post office.

How can I describe Aunt Mary?  I thought she resembled Florence Halop, the woman who played Mrs. Hufnagel on St. Elsewhere and Flo the bailiff on Night Court, only a little taller.

Aunt Mary is in a better place now.  She must be gone close to thirty years, and I still can't walk past a Hickory Farms kiosk without thinking of her.