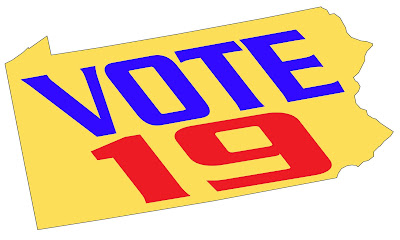 Fred Keller goes to the United States Congress in the 12th district.  No surprise.  He ran a well funded campaign, and a Republican wins in a heavily Republican district.  Having President Trump on your side in central Pennsylvania is a huge plus.  As I repeatedly said in the 2016 primaries, underestimate Donald Trump at your own risk.

Not only did Tony George lose in his bid for reelection as Wilkes-Barre mayor, it wasn't even close.  As Rush Limbaugh said after the 1992 presidential election, the American people fired George Bush.  Tony George got fired last night. Wilkes-Barre still has a perceived crime problem.  The Solomon Creek flood wall should have been built by now.  Many believed Mayor George was not receptive to the complaints and concerns of city residents.  Challenger George Brown promised to show up and listen at council meetings, which was the right thing to say.  The George administration was filled by problems in the police department, which he once headed as chief.  It was just too much for the mayor to overcome.

One other Wilkes-Barre note, and that's the nice total councilwoman Beth Gilbert finished with.  Her personal financial issues made it in to the paper.  She won anyway, based on her reputation as someone willing to go against the tide.  Keep an eye on Gilbert.  She has a future.

Now, the big surprise.  The power of incumbency and the power of a large campaign war chest was not enough for Pat O'Malley to win a third term as Lackawanna County Commissioner.  A lot of things finally caught up with him.  O'Malley was a Democrat, who switched to Republican and back to Democrat.  He was viewed as an opportunist.  There are many who feel converting the old Globe department store into county offices was an expensive mistake.  O'Malley was not in favor of reassessment, a procedure many viewed would restore fairness to the system.  Some of his commercials were viscous and just plain false.  I won't get in to the production values.  Members of county administration came under fire for not playing taxes and garbage fees, and that reflected on their boss.  Some were tired of O'Malley's constant  quest for free publicity.  O'Malley finishes third in a four person race.

Jerry Notarianni came out on top on the Democratic side in Lackawanna County.  Newcomer, and O'Malley running made, Debi Domenick came in second.  It will be interesting to see if fences can be mended and if these two can run as a team in November.

On the Republican side, Chermak and Gianetta cruise to a win.  Incumbent Laureen Cummings finishes third.  It was a bit surprising.  Cummings has a solid Tea Party base.  It just wasn't enough.  Lackawanna County's first female commissioner will not have a second term.  Perhaps Republicans were upset Cummings was aligned with O'Malley for much of her term.

There will be new faces on the Scranton school board and Scranton city council.  People want change.  It's clear the city isn't run as well as it should be, and the dysfunction in the Scranton School District is now legendary.

Turnout looked light yesterday, and turnout is always a factor in every election.  It will be interesting to see the final numbers.  Lackawanna County's turnout was about 30 per cent, higher than I expected.  I saw a lot of quiet polling places on my Tuesday travels.