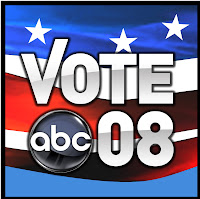 At least for the time being, Pennsylvania is viewed as a "battleground" state-- a state that can go either way November 4th.

The New York Times views Pennsylvania as "leaning Obama." The Zogby poll says it's too close to call. MSNBC has all 50 states solidly going for Obama. Only kidding. MSNBC really has Pennsylvania as a toss up.

While there's some disagreement as to the course Pennsylvanians will follow in six weeks, enjoy the fact that we're important for a little while longer. I'm sure polls will show the state falling into the Obama or McCain camp well before election day, so have fun while it lasts. Watch the candidate visits. Read about them. Think about what they have to say. Think hard. Make your choice.

I've read where a lot of important, learned people are saying this election is historic and extremely important. Nonsense! They all are.
AT 12:01 AM