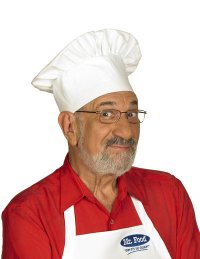 As you might have read by now, the TV chef passed away this week at the age of 81.  Pancreatic cancer.

Mr. Food never offered the healthiest fare, but it was quick, easy, and inexpensive.  Anyone could do it, and that's something a lot of TV chefs need to remember.  We all don't have a lot of preparation time and exotic ingredients hanging around the kitchen.  Mr. Food, Art Ginsburg, was a very likable character.  He was also smart.  According to the Associated Press, Mr. Food topped out at 168 stations.  It was around 125 at the time of his passing.  He prepared good, simple food and he did it fast.  There's an Art to that, pardon the pun.  He had an elementary approach, and that's not a bad thing.  I've seen basic concepts mucked up by so many people over the years.

Let me tell you a little story about Mr. Food and northeastern and central Pennsylvania.  I spent much of the 90's at WYOU, when it was located in downtown Scranton.  In an effort to show we were a regional broadcaster, we had viewers send their Mr. Food recipe requests (remember, this was pre-internet) to our tiny newsroom in downtown Wilkes-Barre.  If a Scranton based reporter, like me, was passing through, it was our job to bring the sack of mail north to Scranton.  It was no big deal.  Most days, there was a fair amount of mail.  Mr. Food was a popular fixture in our noon newscast.  But, if Mr. Food made a sticky, ooey, gooey dessert, the number of recipe requests skyrocketed.  People in our area love their sugar, and butter, and cream, and chocolate!

Even though it hasn't said WYOU on one of my paychecks since 1998, Mr. Food is still part of my life.  There was a day, several years ago, after I started at WNEP, when I was producing the noon newscast, and nothing was happening.  Zero.  It might have been the slowest news day in history.  I joked that I was going to lead the broadcast with Mr. Food.  I still make the reference on occasion.  When I'm reporting, and if my story is not at the top, I complain that I'm running "after Mr. Food."  On normal days, Mr. Food was usually at the tail end of the broadcast.  Okay, I guess you have to be in a newsroom to fully understand.  Jon Meyer always laughed, and that was all the encouragement I needed.