Okay.  You knew it was coming, and here is the first of a couple days of thoughts on Hurricane Sandy.

Hurricanes give you plenty of notice that they're on the way.  We all realized, days ago, that our area was in big trouble, though not as bad as the coast.

I did the typical pre-storm prep at home-- made sure flashlights and batteries were handy.  The car was filled with gas.  I also got ready for work-- rain coats, extra snacks in my bag,  charged digital cameras, charged cell phones, etc...  I didn't understand the rush for water at the supermarket.  I've seen flooding take out water mains, but that doesn't happen often.  I'm on a municipal water supply.  It still works if the power goes out.  I have a gas stove.  Boiling water was an option of the water company's chlorinators failed.

As I was getting dressed at 1 AM Tuesday, my lights flickered as the wind gusted.  I thought, "This is it."  It wasn't.  The electricity, at least where I live, stayed on.

My first stop was a mini mart.  I grabbed a couple cups of yogurt and a pre made egg salad sandwich that was likely assembled when Harry Truman was in the White House.  I wolfed them down and pointed my car toward Interstate 81.  The drive, in spite of the high wind, was surprisingly easy.

News is a collaboration, so when I got to work, potential assignments were discussed with Thomas the producer, and anchors Tom and Mindi.  There was also input from meteorologists Michelle and Joe.  We decided Monroe County was the place to be.  It was closest to Sandy's center, and even in the early stages of the storm, we were getting reports of massive power outages.

Photographer Mark and I loaded up one of our two satellite trucks and left Moosic.  The van was getting knocked around in the wind.  It got really bad in the higher elevations-- from Tobyhanna to Tannersville.  The interstates were littered with branches and other debris, but were passable.  It was eerie.  The roads were empty.  Even tractor trailer drivers parked their rigs.  As I noted on our morning broadcasts, you know when it's bad when the trucks are idle.

The eeriness continued as we got off Interstate 80 and turned on to Main Street in Stroudsburg.  Total darkness.  No traffic.  The only noise was the howling wind and the rush of McMichael Creek.  Despite the heavy rain, it was nowhere close to flooding.

We picked a location near our Pocono Newsroom, put up the satellite dish, and we were off and running for the next several hours.  Below is the view after the sun came up. 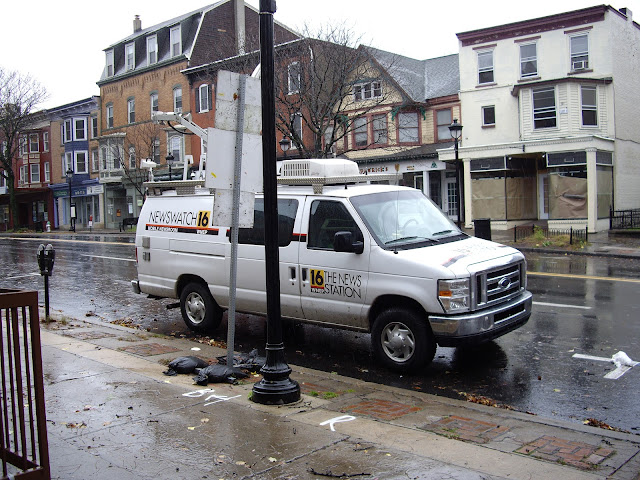 After our last live hit on WNEP2, we set off in search of a story for our noon broadcast.  I'm a firm believer that you get your best stories when you don't have a road map in mind.  Photographer Mark and I just grabbed a camera and a microphone, and started walking around downtown Stroudsburg to see what was going on.

We learned about a restaurant owner, with a single generator, trying to keep freezers and refrigerators filled with food up and running.  He's a nice guy.  He allowed some of his competition to store food in his shop.  We met a hotel general manager, in the middle of trying to turn around a long neglected facility, having to turn away guests because he had no electricity.  There was one lamp in the lobby, powered by a pick up truck parked outside.  We also met a cab driver-- with few fares.  The ones he did have were a challenge because of the debris on the road.

Below is a very quiet downtown Stroudsburg. 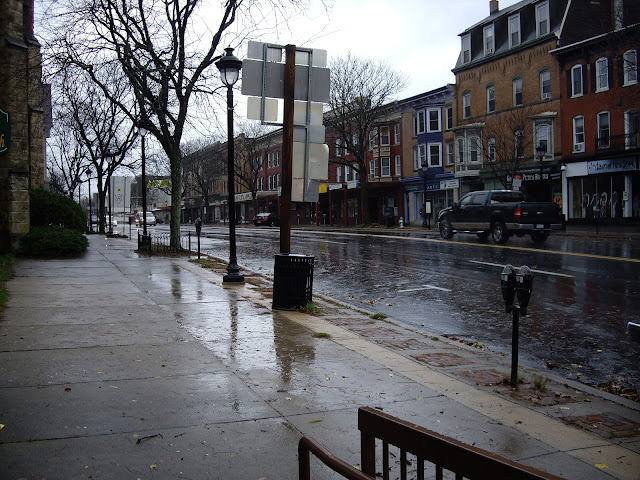 Adverse conditions bring out the best in people.  A woman passing by offered to walk several blocks to get coffee for Mark and I.  We declined the generous offer.  I couldn't ask someone to do that, even if I drank coffee.

I learned a lesson in "bands of a hurricane" Tuesday morning.  There were times the rain would stop and the wind disappeared.  Five minutes later, it was the total opposite.  You knew the storm was moving out when time between the bands increased.

We finished our noon broadcast, dropped the dish, and headed home.  The wind had died down.  The return trip was much easier.  Traffic picked up, and things looked almost normal.

We got back to the office.  I briefed producers and assignment editors as to what I learned, and I went home, a 12 hour day coming to an end.

When I got a couple miles from home, traffic lights were out and police were directing traffic at busy intersections.  I feared power went out at home during my absence.  I was relieved to learn my little town weathered the storm OK.

I have election thoughts scheduled here for Monday, Tuesday, and Wednesday.  Look for another storm story on Thursday.
AT 12:00 AM