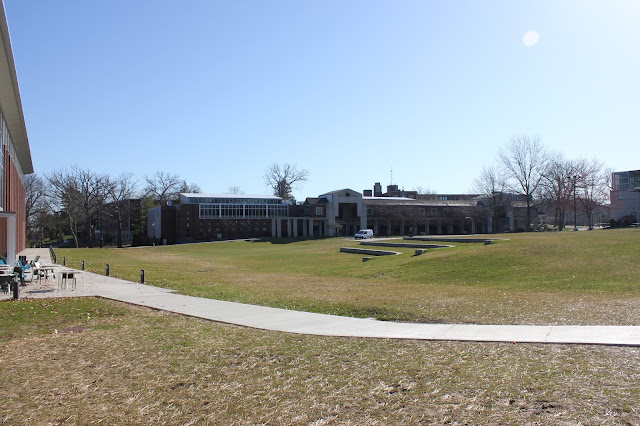 Apology in advance for what I think will be a long and convoluted entry.

One of the things I always admired about Marywood was its commitment to trees and green space.  It's a beautiful campus.  It was in my day.  It still is.  Let's get oriented.  The new library is at the left.  The old library was in the center.  You can see the corner of a relatively new arts building is on the right.  Architecture is in the building in the background.  That was the gym and pool back in my day.  The field at center right was always there.  Much of today's entry deals with that field.

One of my biggest college adjustments was getting used to late afternoon and evening classes.  I hated them.  The hate lasted until the day I left.  Unfortunately, there was no way around it.  I took as many early morning classes as I could.  Yes, I was a morning person even way back then.  Some classes were only offered in the late afternoon and evening.  I didn't like it, but that's college life.  It was the high school advantage.  You were out the door at 2:45.

Freshman year at Marywood.  French. Mondays and Thursdays, 4 to 5:15 pm.  Not only was it a course that wasn't in my wheelhouse, I sat at my desk and watched night time arrive, and the sun sink.  As it turned out, the sun wasn't the only thing sinking.  My grade was along for the ride.

I made it through that first semester with a C, and it was a major accomplishment.

There is a phenomenon called "summer slide."  Students often forget what they learned during the summer, so there has to be a bit of a review in the fall.  Back in my freshman year, Marywood had something called "Winterim."  Christmas break was extra long, and the school offered courses during the break, like it did in the summer.  My first year at Marywood was the last for Winterim.  The school then shortened the post Christmas vacation.  Instead, there were two different summer sessions.  I didn't participate in Winterim, but I did take courses during my three Marywood summers.  Note to college kids, present and future:  take summer classes if you can!

Second semester of French was a monumental struggle, the biggest of my college years.  There was one afternoon, after a particularly grueling class, when I was cutting across the field, on my way back to my car in the parking lot.  It was still cold, but spring was in the air.  Darkness was arriving, but you could tell the days were getting longer.  I encountered a robin during my cross field short cut, my first of the season.  I started at the bird.  The bird stared back.  For a moment, my French worries disappeared.

The respite was short.  Another French class was just a couple of days away.  As hard as I tried, I just couldn't get it.  My grade for that second semester of French, spring 1980, was a D, and I considered it a gift.  I smiled in tremendous relief when the report card came in the mail.

I cannot visit, or even pass, that field without thinking of that robin who made a tough time just a little bit easier.
AT 12:00 AM