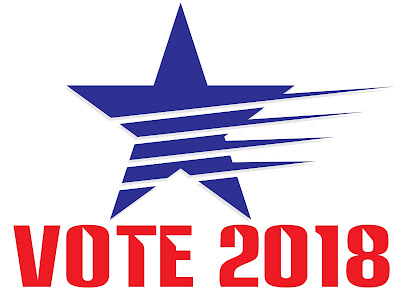 It's finally here!  Election Day.  Polls open at 7 am, and they stay open until 8 pm.

Barring unforeseen events and circumstances, my day will go like this-- a fast food breakfast, tweaking of scripts when I get to the office, introducing some preview pieces from a polling place, and then doing a story for the noon broadcast on morning voter turnout.

I'll then hand off to the dayside reporters and photographers, and the people who will be around as the numbers come in.

After a nap, I'll be up during prime time to watch my coworkers handle the election returns.  A little analysis should be in this space tomorrow morning.  I have some ideas about what might happen today. We'll see if I was right.

There are those who are looking at the primary as an indicator of trends and possibilities in November.  I think there is some truth in that.  But, remember that Tip O'Neill said "all politics is local."

You might notice, I'm leaving something out-- voting.  I'm an independent, so I'm forced by law to spend this election day on the sidelines.

Check this space, plus Twitter @AndyPalumbo_ for some election day notes as we move through Tuesday.

>>>2:45 AM UPDATE:  Election morning tradition of a spicy chicken sandwich and fries breakfast continues.  This particular fast food restaurant seems to have stabilized.  Good sandwich, average fries.  Decent service.  Much better than recent years, but still room for improvement.    Arrived at the office, double checked scripts.  WNEP election coordinator Brian Holmes informed me last night that two candidates I really wanted to speak with today will be out of town.  Official business.  I guess that's what happens when you don't have primary opponents.

>>>4:45 AM UPDATE:  First live shot of the day done, several more to go.  We chose Greenwood Hose in Moosic as our backdrop.  Why?  Why not?  It was a bit strartling when we arrived.  There is not one political sign outside the building.  I went on line to make sure it is still a polling place.  It is.  Really.  Trust me.  I'm a reporter.

>>>7:20 AM UPDATE:  Polls opened 20 minutes ago.  Light turnout in Moosic, but this is a heavily Democratic town and some of the big Democratic races have no opposition.  Poll workers tell me they don't expect to be very busy today.  I was here for the presidential election two years ago, and there was a line when the polls opened.

>>>10:40 AM UPDATE:  A flurrie of activity...  visited four polling places.  Very weak turnout, even in places where it was expected to be good.  As usual, there is traditionally a bump when people get out of work.  We did run in to a few people who wanted to vote before the rain hit.  Saw some old friends this morning in Olyphant!  Wrote my noon story, met with management on other topics, sweating profusely, almost ready for noon.

>>>2:30  PM UPDATE:   Noon story and accompanying live shot went well.  Photographer Jason handled my morning stuff.  Photographer Dave edited the nmoon piece and handled the live shot.  Thank you.  Saddened by weak voter turnout in Lackawanna County.  I hope it's better elsewhere.  Finally arrived home after a whirlwind of family responsibilities and errands.  I can relax and breathe for a moment.  I've been up since 9:30 last night, and let's just say I've had better days.   Time for a little sleep, and watching the returns later on.
AT 12:00 AM