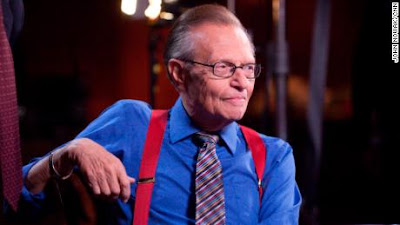 I always had mixed feelings about Larry King, who died Saturday.

On the radio, King spoke to thousands, but he was the very best at making it sound like he was just speaking to you.  Very few have that ability, and it was most valued on his midnight to 5:30 AM radio show.

That radio show that shot King to national prominence was one of a kind.  News, interviews, humor, phone calls...  Larry King ruled the night.  He is perhaps single handedly responsible for keeping the Mutual Broadcasting System going as long as it did.  You see, Mutual had a rule.  If you wanted Larry King, you had to take all of the network's other junk along with it.  The newscasts weren't bad.  The other feature programs were awful, and I'm being kind.  Mutual was a goner not long after King cut back on his radio work.

Larry had a thing about never researching guests.  He said that was so he would ask the questions the common person would ask. Translation:  lazy.  Yes, Larry did ask the questions, but he did miss out on a lot of opportunities by not doing research.  Overall, Larry King was a good interviewer.  Solid.  The best?  Well...  I'm not putting him on Mount Rushmore.

If you want to see something really sad, look up the clip from King's interview with Jerry Seinfeld.  King went in to it horribly unprepared and Kudos to Seinfeld for calling him on it.

It continued when King moved over to TV.  During a "60 Minutes" interview, Mike Wallace asked King about being a "patsy."  He got big interviews because he didn't ask the tough questions.  People knew they would get a free ride on King's shows.  He copped to that and added that confrontation wasn't what he was all about.

Case in point, Jerry Lewis would make a yearly appearance to plug the telethon.  King would always ask about the status of medical advances.  Lewis would always say they were "close."  The assertion was never challenged.  While tremendous strides have been made, "close" to a cure isn't a word most people would use.

Larry King had a smooth and easy going style, and there were many nights and mornings it appeared he was just mailing it in.  The radio show kept being cut back.  It eventually wound up a three hour show at 10 PM before King quit it altogether.

I respect Larry King's accomplishments and his longevity.  There was something about him that people really liked