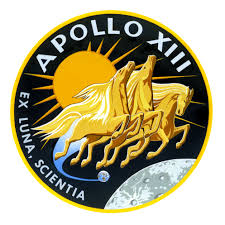 Today is the 50th anniversary of the explosion that crippled Apollo 13 on its way to the moon.

I vividly remember Walter Cronkite's grave tones on CBS, explaining the accident and what happens next.  It didn't look good.  There was just a narrow window of opportunity for a safe return to earth.  It was a frightening time.

Of all the things that happened that week, one of the things I remember most is my third grade teacher leading our class in prayer for the safe return of the astronauts.  Remember, this was public school.  If a teacher tried that today, there would likely be a letter of reprimand in your file-- or worse!

As it turned out, the astronauts made it back safely.  We learned NASA can be a fantastic problem solver.  What was nearly a disaster became a spectacular triumph.

You could hear the national sigh of relief as the astronauts were plucked from their capsule in the Pacific, near Samoa.
AT 12:00 AM