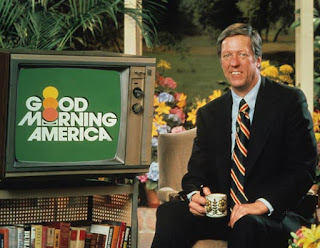 Regular blog readers know I'm fascinated by Fred Silverman.  He ran the programming departments of CBS, ABC, and then NBC before forming a production company of his own.  He is responsible for keeping CBS at the top and building ABC in to a powerhouse.  The NBC years were not as great.

Silverman died in January.  I've been reading a lot about him, plus watching hours of interviews on You Tube.  He had a passion for the medium, and it comes across during the interviews.  Yes, Silverman is responsible for a lot of jiggle and schlock shows, but you cannot deny that he was one of the most influential programming executives in the history of television.

I thought I knew it all, but I recently came across a fascinating nugget.  When he arrived at ABC in the mid 1970's, Silverman inherited a disaster of a morning show called "AM America."  By the way, I didn't think it was that bad, but what did I know?  I was a high school kid at the time.

"AM America" crashed and burned in ten months, and ABC was ready to give up on morning television, according to Silverman.  The plan was to give the time back to ABC's local stations.  Silverman talked the big brass in to giving it another shot, with the entertainment division producing the show.  Silverman came up with the concept of something a little lighter than the "CBS Morning News" and "Today."  He wanted a warm host and a stable of contributors.  "Good Morning America" was born.  It grew in to a major success and the rest is history.

Fred Silverman does admit to a mistake.  It took them a while to find the right companion to David Hartman.

I knew Silverman helped shape American prime time viewing, but I had no idea he was such a force in the morning.
AT 12:00 AM