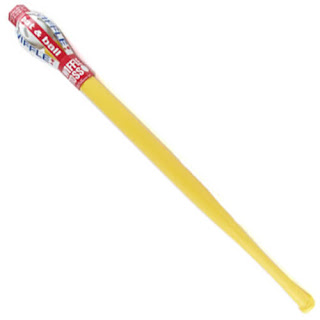 My camera phone was out in the car when I saw it, but this is what I discovered during a recent trip to a drug store-- new wiffle bats and balls.

Getting a new set was always one of the joys of late winter/early spring.  I loved those after school backyard games-- still a chill in the air.  The yard was too muddy to play in, but we did it anyway.

After a few games, the bats would flatten out and eventually split.  The balls wound up with electrical tape wrapped around them to heal the cracks.  Eventually, you'd have to get new ones, and it was no big deal.  The balls and bats did't cost much and they provided hours of fun.  It was a wise investment.

The store display appeared to be full.  I hope the joy of wiffle ball isn't lost on the current crop of kids.
AT 12:00 AM