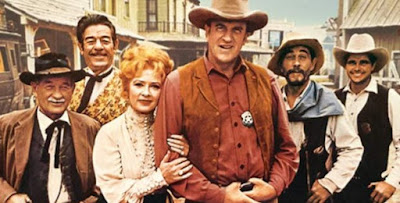 When it comes to television accomplishments, there was "Gunsmoke," and there was the rest.

Last week marked the 45th anniversary of the airing of the last original episode.  20 years on the air.  635 episodes.  Yes, 635!  Back in the day, series filmed 39 original episodes, and went in to reruns for 13 summer weeks.

It was classic drama every week-- good versus evil.  Matt Dillon would ride in at the end and save the day.  It was formula television, but it was just so watchable.

It was the favorite show of CBS chairman William Paley and his wife, and that helped keep the show on the air.  It didn't need much help.  It was frequently among the most popular shows on the network.