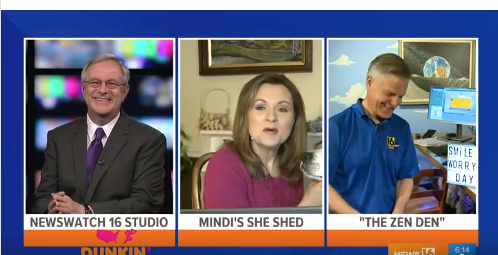 You know the story that dominated the year, and it forced your favorite news team to separate for months.

This is a screen shot from the morning of April 13, the day after Easter.  The separation began a few weeks prior, but this was my first time anchoring a weekday morning broadcast with the arrangement.

Mindi was anchoring from her home in Lackawanna County.  Joe was doing the weather from his home.  I was at the office, filling in for Tom.  It was awkward and took a little adjustment.  Any time I felt uncomfortable,  I remembered that there were people who had it a lot worse.

Also, the hair became a bit shaggy during the lock down, as barber shops were forced to close.  It took some getting used to, and I was thrilled when it came off.
Again, if long hair and missing some friends were the worst things that happened this year, there is really nothing to complain about.
We will be aiming high tomorrow.
AT 12:00 AM