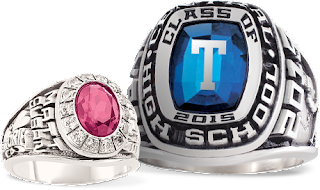 It was one of the more interesting stories to come down the pike in quite a while.

A young man lost his Wilkes College class ring in the Agnes flood of 1972.  It was recently found during a burglary investigation and returned to its owner.

Newswatch 16's Alicia Nieves did the story and hit it out of the park.

It got me thinking about my one and only class ring.  High school.  I bought one, against my better judgement.  I wore it all of once-- the night I graduated.  It hasn't been on my finger since.  I know exactly where it is right now.  First, other than a watch, I'm not a jewelry guy, and I only wear the watch when I'm at work.  Secondly, I didn't see a class ring as a big thing.  Just about everyone buys one because, back in my day, just about everyone graduated.

I briefly, very briefly, considered getting a class ring as my Marywood days were nearing an end.  I didn't.  They were too expensive, and as I noted earlier, I'm not a jewelry guy.  I took a heavy class load my first two years.  Plus, I always took summer courses.  By the time my senior year arrived, I was barely there.  If that isn't enough, I had been working in my field for two years when I received my diploma.  Graduation was an anti climax.

I always envied those people who develop a real connection with their schools.  It just never happened for me.
AT 12:00 AM