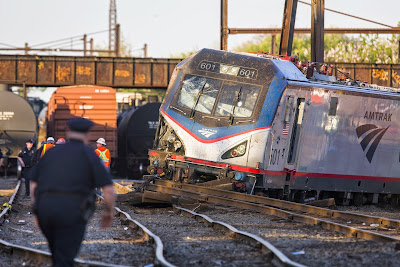 Reguylar blog readers know I like trains, so I was especially sickened by what happened in Philadelphia Tuesday night.  An Amtrak train crashed.  Eight died.  Dozens hurt.

As I write this, the official cause is unknown, but we do know the train was traveling at 106 MPH in an area where 50 is the max.

As I was watching network reports of the incident and the follow ups, it was appalling to learn how little we spend on rail in this country.  Rail can't meet all of our transportation and commerce needs, but it's clear it can do a lot more.

A better rail system takes strain off airports and highways-- and that makes them safer.  Rail can be an exceptionally efficient way of getting people and material around.

I have a sinking feeling we'll learn human error caused the deadly crash Tuesday night, but the whole episode really makes note of the infrastructure problems this country has.
AT 12:00 AM