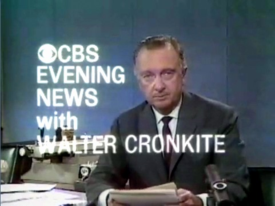 Yesterday was the 35th anniversary of Walter Cronkite's last broadcast of the CBS Evening News.

The man was a god.

Go back and look at some of Cronkite's old broadcasts on YouTube.  he spent many of his early years working for the wire services, and his delivery almost resembles the tat-a-tat of those big old teletype machines.  It was a clean, spartan style, and it was an absolute delight-- especially when you have to listen to some of the wordy, egotistical, self serving drivel coming from the mouths of some of today's broadcasters.

Things were different when Cronkite was wrapping it up.  CBS had a mandatory retirement age of 65 for everyone except the founder.  Dan Rather had a huge offer on the table to be the face of ABC News.  Uncle Walter, the most trusted man in America, was nudged toward the door.

Cronkite joined the CBS board of directors, but he, sadly, didn't have much to do on the air.  insecure Rather was afraid of the shadow Cronkite cast, so he had news division management keep Cronkite in the closet.

I was too young to remember Cronkite's coverage of the Kennedy assassination, but I do remember the conventions, the election nights, and of course, the space program coverage.  Yes, Cronkite was part NASA cheerleader, but he was knowledgeable, and he made the broadcasts fun and interesting.

Walter Cronkite's coverage of the Vietnam War probably helped end the fighting.  After a documentary, where Cronkite noted the best we could do is a stalemate, President Johnson said "If I've lost Cronkite, I've lost middle America."  Johnson dropped out of the presidential race a month later.

I can still hear Cronkite, night after night, giving the Vietnam kill numbers.  A decade later, he closed with the number of days Americans were held hostage in Iran.

So much power.  So much responsibility.  Walter Cronkite really was America's anchorman.
AT 12:00 AM