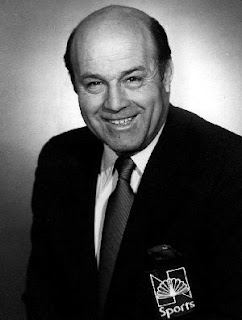 That was the title of NBC's Monday Night Baseball pre-game show for many years.  Garagiola had about 15 minutes to tell a story.  It was stuff that we didn't ordinarily get a chance to see.  No breathless news updates.  No highlights.  Just a baseball related story.  It set NBC's Monday night package apart from the rest.

Joe Garagiola was more than a baseball catcher turned announcer.  He fought to get smokeless tobacco out of the game.  He raised money and helped create a charity for broke ex-baseball players.

There were game shows.  Sale of the Century and To Tell the Truth to name a couple.

There are plenty of Garagiola To Tell the Truth clips on You Tube.  By the way, the announcer for the final year of the syndicated 70's version was Alan Kalter, who was David Letterman's announcer after Bill Wendell retired.  Garagiola did a good job with it.

There were a few years on the Today show back in the 60's.  He came back in the 90's to quiet the turmoil on the set.

Garagiola had the onions to walk away from baseball  in 1988 when he felt NBC wasn't treating him fairly during contract negotiations.  By then, NBC had broken up the very listenable combination of Garagiola and Tony Kubek.  Kubek was shunted off to the "b" team, with Bob Costas.  By the way, Costas and Kubek were extremely good together.

For Garagiola's last few years in the booth, he was teamed with the sanctimonious Vin Scully.  Joe couldn't be Joe and you could hear it.  Scully kept his color guys on a very short leash.

My brush with fame:  1975.  I was at a Yankees game in Shea Stadium.  The Yankees spent 1974 and 1975 there while Yankee Stadium was being renovated.  Garagiola saw me in the stands, looking up in to the broadcast booth with my pair of mini binoculars.  Joe waved.  I waved back.

Here is the bottom line.  Joe Garagiola was far from the best announcer or game show host that ever lived, but he was among the most likable.  You can't bottle that.  You can't teach that, and only the special ones have it.