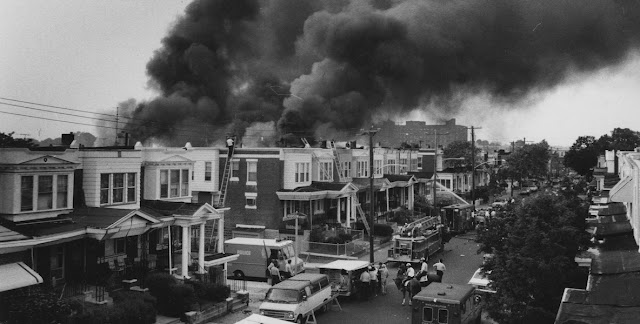 It happened 35 years ago today, and what occurred  that day is still debated.

Philadelphia authorities clashed with members of a radical group.  Police dropped a bomb on the group's Osage Avenue headquarters.  It started a fire that killed 11, and destroyed a city block.

I'm not going to talk about what the city should and shouldn't have done 35 years ago.  I don't have all the information that went in to the decision.

I do remember watching the CBS Morning News that day.  It was using live video from the CBS station in Philadelphia.  It was simply fascinating stuff to watch, and it was also horribly sad.  First responders in danger.  People died.  Innocent residents lost their homes as the fire swept down the block.